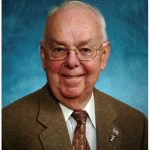 Bill was a native Delawarean hailing from New Castle.  He attended the William Penn High School and graduated from the PS DuPont High School in Wilmington.  After a year at the University of Delaware he entered the U.S. Military Academy by means of a competitive appointment as the son of a deceased veteran of WW II.  Following graduation from West Point in 1952 and some training which included jump school he was sent to Korea as an infantry lieutenant.  At the completion of his military obligation he entered Temple University Medical School graduating in 1959.  An internship at the Delaware Hospital followed.  Bill then opened a family medicine practice at Foulk and Silverside Roads in North Wilmington.  Shortly thereafter Bill was appointed the part time supervisor of the Delaware Hospital ER.  Following the merger of the Delaware, Memorial and Wilmington General Hospitals, Bill became the director of ambulatory and emergency services of the Wilmington Medical Center, a full time position.  In 1975 Bill was appointed vice president for medical affairs at St. Francis Hospital

This is when I first met Bill.   He and I interacted on the credentials committee where applications to join the medical staff were reviewed and evaluated.  On occasion there was controversy.  Bill always valued the perspective of the committee members. Bill was also a source of advice on dealing with hospital administrators.  If there was an adverse event or unexpected death (prior to review committees) Bill would be on the phone wanting to know the details.  As an examiner for the FAA and air traffic controllers he would follow up on patients he referred.  We worked together on nominating committees where he was transparent and open to advice and suggestions.  Bill retired from St. Francis in 1993.

All during this time Bill was active in the PA and later the DE National Guard eventually as commanding officer of the 116th Surgical Hospital (Mobile Army) and later as commander of the 261st Signal Command.  During his military career Bill served in three branches of the army:  Infantry, Medical Corps and Signal Corps.  He retired from the National Guard in 1987 receiving many recognitions and awards.  Bill was appointed a charter member of the Army Historical Foundation.  His lifelong interest in the military also continued with the Delaware National Guard Heritage Committee and the Delaware Military Museum.

Bill was the 19th president of the Delaware Academy of Medicine in 1976 and 77.  He was chairman of the planning committee for the Academy’s 50th anniversary celebration in 1980.  This three day event included cultural, educational and social activities.  Some notable speakers included Isaac Asimov, Ph.D., Eli Ginsberg, Ph.D., and Edmond Pelligrino, M.D.  Bill believed his most significant accomplishment while president of the Academy was to stabilize a precarious financial situation.

Bill was an author.  His Founders of the Medical Society of Delaware, was published in 2017.  He was working on a biography of James Tilton, M.D., a founder of the Medical Society of Delaware and its 1st president at the time of his death.  He documented the service of Delaware Physician Veterans of WW II (1994) and the Korean War (2000) in the Delaware Medical Journal.  His most recent effort, the Contemporary Veterans Project published in the Delaware Medical Journal in Nov-Dec 2018 was to recognize the service of those Delaware Physician Veterans post Korean War.  This is where Bill and I reconnected.  It was my honor to assist Bill in completing this project and identifying every possible Delaware physician veteran post Korean War.  This collaboration was interesting, rewarding and fun – all because of Bill Duncan.

Bill was a leader.  He was open, transparent, articulate and he listened.  He had a vision of what was to be accomplished.  He led infantry units, medical services, the St. Francis Hospital Medical Staff, Temple University Alumni, a U.S. Army Mobile Surgical Hospital and Signal Battalion, the Medical Society of Delaware and the Delaware Academy of Medicine.  One thing to recognize is whatever Bill did – he did well.

He would on occasion speak of his Dad, a soldier and veteran of WW I and WW II who died when Bill was quite young.  I can just imagine what Bill’s Dad might say if he was here today, “Well done, son.  Mission accomplished.”

To see an interview of Bill Duncan, MD, taped in 2012, click here