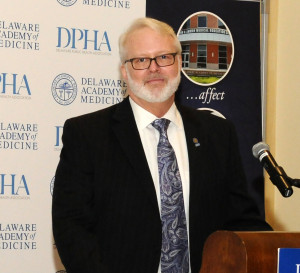 Mr. Gibbs is the executive director of the Delaware Academy of Medicine / Delaware Public Health Association.

A native Delawarean, he attended Wilmington Friends School, then Earlham College.  Mid-career he became certified in nonprofit management, and then pursued a Masters degree in Public Health.
Tim has dedicated his professional career to the nonprofit sector and human services delivery. Notable accomplishments include:

Mr. Gibbs is believes in the power of membership, and is an active member of: The American College of Healthcare Executives, American Public Health Association, American Planning Association, and the National Academy of Medicine.  He also sits on the boards of the Immunization Coalition of Delaware, American Society for Hypertension – Delaware Valley Chapter, the Delaware Community Foundation Development Team, the Delaware Stroke Initiative, and recently stepped down from a 5 year commitment to the Board of Wilmington Friends School.