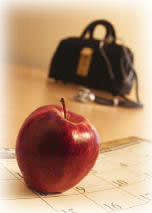 The Delaware Academy of Medicine health fair was the first such event to be held in Delaware. The fair was open during the week of March 14-21, 1962. The idea first arose in 1960, when the executive committee of the medical council of the Medical Society of Delaware was inspired by reports of a successful health fair in Columbus, Ohio, in 1959 and urged the Academy to do something similar. Dr. Douglas M. Gay, who had recently retired from his career as a pathologist, was selected as overall director of the project. Besides Dr. Gay, the executive committee for the health fair included Academy president Dr. George A. Zurkow, Academy executive director Eugene C. Syrovatka, Dr. Allston J. Morris, Dr. Norman L. Cannon, Dr. Leonard P. Lang, and public relations expert Ashworth Burslem.

The Wilmington Armory was chosen as the most suitable site for the health fair — at the time, there were no other places in the city large enough to hold everything that was planned. Medical and health groups from all over Delaware were invited to participate by sponsoring exhibits, and almost seventy of them chose to do so, providing fifty exhibits. Over three hundred physicians, dentists, and other health professionals volunteered their services to staff the various exhibits and booths.

Many exhibits were provided by the AMA, including a “Transparent Woman” model, the first to be shown in Delaware. At other exhibits, visitors could receive medical advice, hearing tests, diabetes tests, and even chest X-rays. Many exhibits were geared toward encouraging younger visitors to consider careers in health fields. With the help of Delaware’s senators, the Academy was able to get NASA to provide a replica Project Mercury space capsule for an exhibit on space medicine, a subject of tremendous interest at the time. Medical movies were also shown in the armory’s basement.

The health fair was a tremendous success, drawing more than 65,000 visitors — over 6,000 of whom were schoolchildren. Prominent attendees included the mayor of Wilmington, the governor of Delaware, and the ambassador from Nepal. Although the fair had originally been scheduled to close on March 20th, reaction was so positive that it was decided to keep it open an extra day.

The bulk of this collection is made up of Dr. Gay’s correspondence with various people and groups who attended, assisted with, or sponsored exhibits at the health fair, as well as other material he collected during the planning process. This includes minutes of the various fair committees; applications for exhibits; budgets, bills, invoices, and other financial records; photographs of exhibits; newspaper and magazine clippings about the fair; brochures, programs, booklets, tickets, flyers, and other promotional material, both for the fair and for the various organizations involved; and more. Some correspondence to and from Eugene Syrovatka is also included.

The folders that made up this collection were found disarranged, interfiled randomly with other material from older special events held at the Academy. The papers within the folders, however, were generally well-organized in chronological order, and this has not been altered.

Dr. Gay’s file in the Delaware Academy of Medicine Biographical Collection (AC1-N329) includes a 1983 interview with him; part of this interview is given over to his discussing the health fair and his work on it.