The Lewis B. Flinn Collection at the Delaware Academy of Medicine 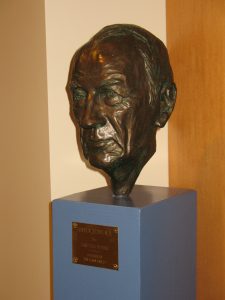 Dr. Lewis B. Flinn was one of the founders and the first president of the Delaware Academy of Medicine. His record of public service, to his fellow physicians and to the state of Delaware, is equaled by few.
Dr. Flinn was a native Delawarean, educated at Friends School, Princeton University, where he took a bachelor of science degree, and the Johns Hopkins College of Medicine, where he received his MD. He served internships at the Children’s Hospital in Philadelphia, Johns Hopkins, and Cragmore Sanitarium in Colorado Springs, and studied for a while in Germany before returning to Delaware, where he spent the remainder of his career. He practiced medicine in Wilmington for 50 years before his retirement in 1974.

Dr. Flinn’s specialty was internal medicine, and he was particularly noted for his work with diabetics. He helped pioneer the use of insulin to treat diabetic patients, and was co-founder and president of the Delaware Diabetes Association, which later became an affiliate of the American Diabetes Association.

Dr. Flinn also worked tirelessly to promote cooperation and dialogue in the medical community, and believed strongly in the necessity of continuing education. Seeing that Delaware had no medical library, he gathered fourteen other doctors and a dentist to found the Delaware Academy of Medicine in 1930. He was also a leading figure in the 1965 merger of three Wilmington hospitals to form the Wilmington Medical Center and was the head of its department of medicine; he had previously held the same post at Delaware Hospital and Memorial Hospital, as well as serving briefly as head of pediatrics at the Memorial Hospital. He served terms as president of the New Castle County Medical Society (in 1945) and the Medical Society of Delaware (1955). On the national level, he was a co-founder of the American College of Physicians and served as its governor for Delaware from 1932 to 1948.

During his career, Dr. Flinn collected many honors, including a mastership from the American College of Physicians, a Distinguished Service Award from the Medical Society of Delaware, and a honorary doctorate in science from the University of Delaware, as well as being a diplomate of the American Board of Internal Medicine. He also had a special issue of the Delaware Medical Journal dedicated to him in 1967.

The collection comprises a book on Dr. James Tilton, first president of the Medical Society of Delaware, given to Dr. Flinn by its author and later donated to the Academy, as well as a bust of Dr. Flinn created by Dorothea Donoho and donated by his family. Also included are a set of 25 photographic slides donated by Dr. Flinn’s son J. Seymour Flinn.

A file in the Delaware Academy of Medicine Biographical Collection (AC1-N100) is dedicated to Dr. Flinn. Among other things, its contents include several photographs of Dr. Flinn, most taken at the dedication of the Lewis B. Flinn Library; a transcript of a 1983 oral history interview with Dr. Flinn; and several clippings and articles about Dr. Flinn.

Donation records show that Dr. Flinn donated 37 volumes of books and journals to the Academy. If any are still present in either the archive or the library collection, they have not been identified.

Photographs
Photographic slides of Delaware hospitals and other locations, 1920-66, 26 slides